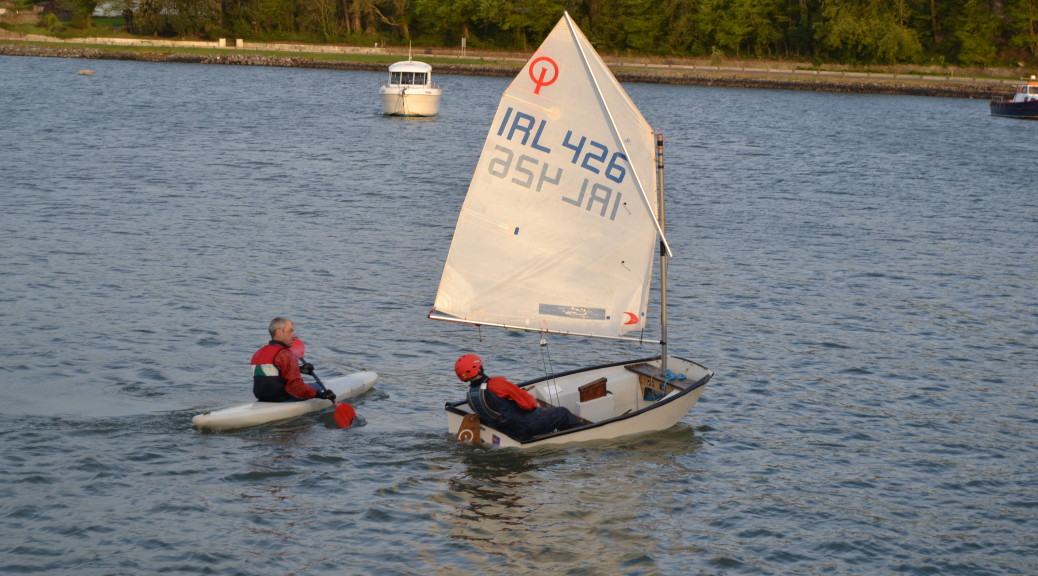 The idea of forming a Sea Scout Group in Aghada, came about as a result of some discussions, about the number of children in the area, and the need for some further organized activities, to help keep them occupied. It was fitting that it should be a Sea Scout group, as Aghada is located in the heart of the area, where recreational sailing started in Ireland, way back in the 1650 – 1700’s, courtesy of the Earls of Inchiquin, and their sailing exploits out of Rostellan Castle. But there had also been a Scout Troop, based in Whitegate, years ago, so there was a scouting tradition in the area. The first meetings, concerning the formation of a Sea Scout Group, in Aghada, were held back in July & August, 2011. Following on these meetings, there were various Training Sessions, and all that good stuff, in preparation, and to lay down guide lines, and so help set up the 66th Cork Aghada Sea Scout Group. But lets be honest, nothing could have prepared us for what was to happen. When we had our Registration Night, 2011, we were overwhelmed, by the response. We honestly did not realize that we would have so many applicants, for Beavers, Cubs and Sea Scouts. We managed to take on board, some 90 + Children, and we still had a large Waiting List. But we did take in as many children as we could, within the Scouting Ireland limits. The limiting factor being, the number of Trained / Certified Adult Leaders that we have involved. Through out the year we have managed to retain a high percentage of the children, and we have managed to keep them occupied and interested. Now whilst we might not have advanced along the official training programme, as much as we would have liked, I can honestly say, that from what I hear, and from what I have seen, that they, the children, certainly have not been bored, and that they have enjoyed the whole concept of the Scouting movement. The 66th Cork Aghada Sea Scouts group have all been away on Hikes, Outings, “Sleep Overs”, Camps, and all have been on the Water, or indeed in the Water, at some stage or other, over the Summer Months. There have been visits to the Woods, to Wind Farms, Fire Stations, Light Houses, Coast Guard Stations, and many other places of interest. The last “Visit” to, and the “Camp Over” on Spike Island, the culmination of the Scout Year, was a great success, and we would like to publically thank the Cork County Council, and in particular Mr. Tom O’Neill, the Manager of the Spike Island Facility, for all his interest and his assistance, in making the Camp such a success. We look forward to repeating the trip, next Year. And so to all the people who helped to facilitate these visits, again we say “Thank You”. At this stage we would also like to take this opportunity to officially thank the following; Lower Aghada Tennis & Sailing Club, and the Aghada Community Council, and the Aghada National School, for their tremendous support to date, without their assistance, we would not be where we are. We would also like to thank Trabolgan Holiday Centre, for their fantastic assistance, and support on our Investiture Night, back in March 28th. May we also take this opportunity to publically say a great big thank you, to all the Adult Leaders, for their patience and their dedication throughout the Year, again without you, we could not / would not exist.

In the late 1970’s Terry Fanning moved to the Aghada area with his job. Terry had previously been involved with the CBSI (Catholic Boyscouts of Ireland) movement in his native Skerries and on his arrival to the area he joined the local Midleton scout troop (23rd Cork) as a leader. Some boys from the locality joined Midleton cub scouts and Terry ferried them to and from the weekly meetings in his car. As the numbers interested in cubs grew, parents had to become involved to assist in transporting the increased numbers to their meetings. After a couple of years the numbers interested from the Aghada area were such that it was decided to start a troop locally. 66th Aghada was born in 1980 and Terry was joined by John Dominey, Mary Hussey, Nora Garde and others Liz Conway as leaders. 66th Aghada had the unusual distinction at the time of being set up as a cub scout troop initially. Most groups were developed from scouts first of all, with cubs following afterwards. In time, a beaver section was set up, the original cubs progressed to scouts and a number onto Venture scouts, which meant that all facets of CBSI were catered for by 66th Aghada. Other leaders such as Tony Roche and Tony Cotter became involved at this point working with the older age groups. Invaluable support was provided by a local committee. Original members were Eileen McAteer, Paddy O’Shea and Peter Ahern. 66th Aghada was very successful for a number of years but eventually the battle of competing with Playstations and X-box was lost and interest in scouting activities reduced such that 66th Aghada became inactive for a number of intervening years. A similar situation was experienced throughout the country resulting in the re-invention of CBSI as Scouting Ireland.